The last day of the conference

wrapped up with two different

sessions, comprised of six different themed talks in the morning. After another deliciously catered lunch, the remaining hours of the conference included the annual member's meeting that was welcome to all conference attendees. There, society issues were discussed, and news of future EDIS conferences was announced, including the next annual meeting which will be held in Amherst, MA. Following the completion of the member's meeting, incoming president Martha Ackmann thanked retiring president Paul Crumbley for

his dedicated years of work and commitment. She then presented him with a gift: a piece of art created from Dickinson's Homestead, as a git of thanks and apprecation. The conference ended with many thanks, lots of hugs, and excitement for the next, annual Dickinson event.
Posted by Rebecca Mooney at 4:44 PM 1 comment:

the surprisingly large Blackwell bookshop off Broad Street, sponsored by JHUP. With a background of book-lined shelves, and wine in hand, conference attendees discussed the recent published scholarship of Dickinson, as well as discovered new works recently made available. For me, the most impressive part of the evening may have been seeing the number of accomplished Dickinson authors

collectively gathered together in the same literary space, discussing their specific Dickinson interests and future works in progress. The collection of recent Dickinson scholarship was also something to be impressed by, with Dickinson books stacked upon each other, and overwhelming their table display. It was a fun evening reception, and a great way to celebrate the still blossoming scholarship of Emily Dickinson's works.
Posted by Rebecca Mooney at 4:29 PM No comments:

of the conference, just like the first, was a great success and a lot of fun. The day began with a live video presentation with one of the Plenary Speakers, Paul Giles, giving a talk entitled "Evolutionary Enigmas

and Colonial Equations: Dickinson's Transoceanic Geography". This was followed by a talk given from the second Plenary Panel comprised of Joan Kirkby, Vivian Pollak and Jed Deppman. Based on the conversation that followed, I know it was a thought-provoking and engaging panel of speakers. After lunch, there were several different and

interesting sessions available for conference attendees. I was able to sit on a session, organized and chaired by Geoffrey Schramm, entitled "Manuscripts: Dickinson in Pieces", as well as a session chaired by Cindy MacKenzie called "British Connections: Solitude and Suffering". Both were well attended, very interesting, and came with great conversation after. Overall, the second day of the conference was just as engaging as the first. After the day full of talks on Dickinson, conference attendees were headed for a reception at the Blackwell bookshop, located on Broad street.
Posted by Rebecca Mooney at 4:11 PM No comments:

Because there's way too many pictures to post on the blog, we've uploaded them to EDIS' Facebook page for you to see. Check them out here (and tag yourself and others)!

-Rebecca
Posted by Rebecca Mooney at 5:42 AM No comments:

Reception and Banquet at Oriel College

Where can you find a group of Dickinson scholars on a Friday night while in Oxford? In a beautiful, old banquet hall, wine in hand, and ready for Dickinson discourse of course! The evening began with a champagne reception, sponsored by Johns Hopkins University Press, in one of the banquet rooms of Oriel College. The beautiful room, lined with painted portraits, quickly filled up as conference attendees met away from the Rothermere American Institute for the first time.

The reception was followed by a delicious three course

in the large and picturesque dining hall of Oriel College. Dickinson scholars were able to meet new friends, as well as reconnect with old ones, the experience made all the more special by the beautiful setting. After coffee, tea and desserts were served, Lyndall Gordon, one of the plenary speakers, gave a talk entitled "The World Within': Emily Dickinson and the Brontës," engaging the conference attendees in a candlelight lecture about the connection and influence of Emily Dickinson and the Brontë sisters. It was a great evening in a beautiful location; I'm so glad I was able to be a part of it!


-Rebecca
Posted by Rebecca Mooney at 2:26 AM No comments:

The first day of the conference was a great success! The day began with a brief welcome and introduction from Nigel Bowles, Ron

Bush, Paul Crumbley and Cristanne Miller on the steps out front of the Rotheremere American Institute. Following the welcome, there were four unique sessions comprised of twelve different lectures. With so many great speakers, I know I wasn't the only one struggling to choose where I'd go next. In addition, after lunch, there were

lectures and a discussion with the first Plenary Panel, comprised of Domhnall Mitchell, Paraic Finnerty and Maria Stuart. In every room and every session, new Dickinson interpretations were given and ideas were shared.

The day wrapped up at 6:00, and the group of Dickinson scholars was soon seen walking down the streets of Oxford, headed to Oriel College for a reception, banquet and lecture.

It's said Emily didn't like cats; I can't imagine she'd be too happy to have this visitor trying to sneak into her conference...


-Rebecca
Posted by Rebecca Mooney at 1:49 AM No comments:

In conjunction with the EDIS conference, Edie Campbell is acting in multiple performances of "Emily Dickinson & I: The Journey of a Portrayal", a self-defined "one woman play about writing, acting and getting into Emily Dickinson's dress." I was fortunate enough to see her second performance yesterday evening (with two remaining shows this week). She begins, well, at the beginning, saying: "There she is. Emily Elizabeth Dickinson. Poet." (she subsequently ends the play with Dickinson's own words "Poets -- All --"). Soon she confesses "I am in love with Emily Dickinson. Infatuated. Obsessed." To me, it seems she may have something

in common with a few other tourists wandering the streets of Oxford this week.
The play is the story of her journey to write and perform a piece of work that shows the true nature of Dickinson, without being the sort of "playwright [that] puts words in the poet's mouth" -- an admittedly difficult task. Campbell's story is an interesting one; and I suspect many conference attendees are able to empathize with Edie's personal discovery, long-term relationship and eventual love affair with Emily Dickinson. Campbell interweaves her own personal struggles and inspirations

alongside Dickinson's poetry, life-story, and letters, bringing forth a united story of two women and the power of the written word to both connect and affect one's essence in the world. That said, what probably moved me most was her observation (and I've seen it is a recurring one throughout many of the conference lectures) that Emily has an unnerving and powerful ability to distill things down to their essence. In fact, it seems, by the end of her days, she was a master of this.

With Emily to guide her way, Campbell, in her creation and performance of "Emily Dickinson and I", is able to "Comprehend the Whole --", and unites the poet with the stage. It was truly a great performance.

-Rebecca
Posted by Rebecca Mooney at 1:58 AM No comments: 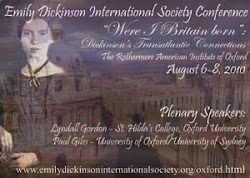